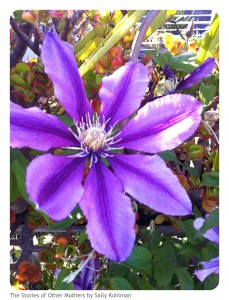 It took me this long to figure out that we are all other mothers. We all have a story, even those of us who look like the perfect “normal” traditional mothers.

This book is not going to be a celebration of the bliss of motherhood. That would be a fiction book. This book is about finding and creating connections between women and other mothers.

When I was a young mother I used to think all of those other moms knew what they were doing, like they were mother experts or something. I was so insecure and ashamed. My kids went to an expensive private school where many of the parents had big, fancy houses and drove big, fancy cars and were a lot older than me. Many of them had Master’s degrees or PhD’s. I was in my 20’s, most of the other mothers were in their 40’s and 50’s. We lived in a fixer upper “small” by comparison house and worked hard to pay our Bay Area bills. I worried they all judged me because I was so young (and I looked even younger than I was). I was terribly embarrassed of my used faded blue Nissan Sentra. I was embarrassed of my job as a chiropractic assistant.  I spent so much of my time worrying about what the other mothers thought of me I never took the time to inquire how they were doing. I just assumed their lives were perfect and they were doing everything right.

At a parent party I attended awhile back, I realized that all mothers just want to be liked and accepted like the rest of us. Everybody is busy, everybody is doing the best they can, and everybody feels inadequate at times. What we all really want is to be accepted and acknowledged. Everybody is going through some kind of challenge and in reality they probably are not spending much time worrying about what the other mothers are doing. If anything, they are probably thinking the other mother’s are doing a way better job than they are at parenting.

If we’d all stop worrying about what the other mothers think of us and instead focused on getting to know each other this whole parenting thing might be a bit easier.