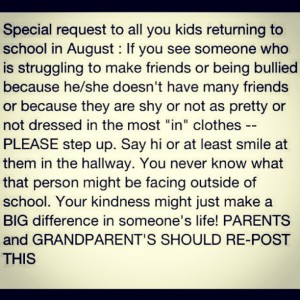 I recently reunited with a guy I have not seen since 8th grade graduation. Thanks Facebook. Seeing him was great, he was a cool dude then, he is still a cool dude today. And by cool, I don’t mean wearing the ‘in’ clothes or following the latest Top 40 band. When I say ‘cool’ I mean a genuine, authentic, trustworthy, reliable, caring person.

I posted a picture of us on Facebook. Posting this picture brought a flurry of comments and private messages from our old classmates. This triggered an emotion in me that I can’t quite explain: a bit of sadness and nostalgia.

I have lived through middle school 4 times! Once myself, 3 times as a parent. None of those times were easy.

I was not in the popular clique, I was not sporty, I was not the smart kid, I was not the nerd, the slut, the pretty girl, the artist, the singer, or the musician, I was kind of the invisible kid. In fact, when I reunited with my friend Joe he said he barely remembered me, all he could remember was that I was quiet and nice.

I was dealing with things outside of the classroom that didn’t leave me much opportunity to even attempt to keep up with what the ‘cool kids’ were doing.  I had a few friends. I observed the others. Also, my family did not have much money during those years, the years when it was wear the right designer brand or you might as well not even exist years. Does IZOD, Jordache, Calvin Klein, Esprit, Guess, Sergio Valente, or Sassoon ring a bell? Well I didn’t have any of those clothes. I had the latest K-mart special or something my mom had hand-sewn for me (she was a great sewer, I have to say).

Being an outsider, I did a lot of observing. Being a late bloomer, I was also quite clueless (learned a lot from my friend Joe on things that were going on in the class that I had NO idea about).  Oh my! Parents if you have not had ‘The Talk’ with your kids yet and they are already in middle school, the time is now.

I observed the dynamics of the classroom. You know that movie Mean Girls? Well there was definitely some of that happening. Some of those girls were so mean to others. I saw the same things happen when my girls were in middle school. What is it with us girls? It is so sad.

This leaves me wondering what the ramifications are. Are the girls who did mean things even aware now just how hurtful some of their behavior was? Do they realize some things they do or don’t do on Facebook now can still trigger hurt feelings in the kids who were bullied and mistreated?  Did they apologize for their behavior? Do they feel shame? If you were the girl or boy picked on during middle school, would you want an apology now? Would the brat taking ownership for their hurtful behavior be helpful to you right now? Was I one of the mean girls and not even aware of it? I definitely wasn’t an angel.

Looking back, I realize I have struggled with some of the same issues throughout life. The invisibility thing… this whole book I am writing is motivated by me being tired of feeling like the invisible parent. Probably the reason I am so out and about online too… How did middle school affect you?

Told you I was a late bloomer… me and Joe about 30 years ago. 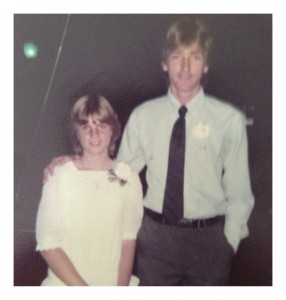